There was an odd sense of unreality as I pulled my soggy shoes out of my suitcase on Tuesday.

Had I really been running through a tropical downpour in Melbourne only two (or three days) previously? The 25 hour flight home and the weird crossing of time zones means I can’t be exactly sure how long it had been: but the shoes were still wet!
I don’t usually write about holidays on this blog. But sometimes one comes along that is just such a great blessing, it needs to be noted, after all this is a “feelgood blog”.
December and early January were, for me personally, just really rubbish  – for lots of reasons. So it turned out to be an extraordinary blessing of good timing that we had made a rather last-minute and crazy decision in late November to attend a family wedding in Australia via Cape Town in South Africa.

It was a joy to meet up with Emma in Cape Town, she and Ben had been there for a week just before Christmas because she is currently working in South Africa. It was like having our own private guide. 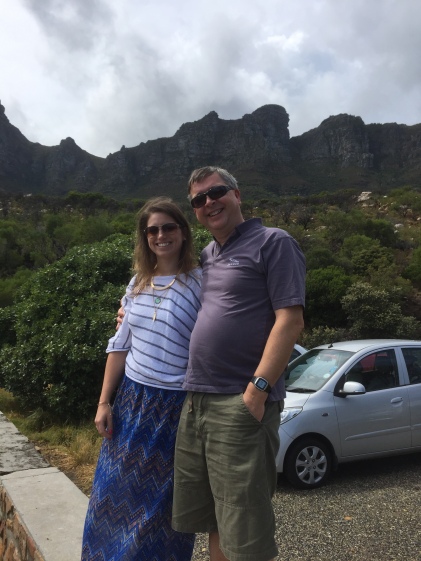 From the very beginning we saw amazing things. Driving into Cape Town from the airport down a fairly ordinary dual carriageway, a flock of birds took off on our right and flew over the car. David naturally was concentrating on where he was going but I looked up and I’m not much of a bird spotter but
“those are flamingos” I exclaimed, “pink, flipping flamingos!”
Suddenly we were aware we were in a very different place.
We didn’t get photographic evidence of all the strange and wonderful creatures we saw but we saw so many we even made a list when we got home: dassies on Table Mountain, ostriches in the wild near Cape point, penguins by the dozen at Boulders Bay, a tortoise attempting a risky road crossing – hope he made it! Baboons at the Cape of Good Hope, wild kangaroos in Kangaroo Valley (where else?) massive bats which I mistook for birds in the suburbs of Sydney, a rat (big!) and a lyrebird in Yarrunga valley.

We slept under a ‘doona’ – especially when the air con was on ( a duvet), swam in our ‘bathers’, wandered around in ‘thongs’ (thankfully flip-flops not underwear), and tried to get used to the Australian habit of beginning sentences with the word “Look!” Several times it caught me out and I found myself thinking “look? At what? Where?”. Eventually I realised it’s just an idiom, quite indicative of the Australian character as opposed to our more ambivalent English habit of beginning sentences with the word “well”.

We also did pretty well for transport: we rode trains and trams, a cable car, a sailing boat and by the final flight home, we even learned to sleep sitting mostly upright in the ‘cattle class’ end of an Airbus.

Amongst all of these new experiences, the greatest joy was actually meeting up with long familiar family and being together to celebrate a wedding. Congratulations Peter and Kayla and thanks for the invitation and the opportunity.

2 thoughts on “A few of the best: South Africa and Australia”