​We had great fun yesterday at our Worship for All service on the theme of HOPE.
We began by lighting our Advent Ring.
“We light 1, 2, 3, 4 candles on our ring, one for each Sunday in Advent,” I said, “when do you think we light the fifth candle in the middle?”
“ON MY BIRTHDAY!!” shouted an enthusiastic 4, almost 5-year-old, in the congregation.
It set a great tone for the service.

After singing “Jesus hope of the nations”, we blew bubbles and talked about how people often misunderstood the difference between hopes and wishes. Wishes are fragile, they may be beautiful but they have no substance and they often don’t last long.
However, Hope, especially the Christian hope is something completely different.

Hope, which we represented by our Gold letter H, was in fact something solid and much stronger than a simple wishing for the best. And it is solid precisely BECAUSE it is linked inextricably to something that has ALREADY happened: Christ came. God is with us.

Our hope for the future rests on the fact that Jesus came as Immanuel, God with us, an undisputed fact of history. We are not alone, therefore we have hope. This hope is like an anchor, it fixes us to something solid and unchanging. Hence the big red ribbon attached to my the big gold H!

Mid sermon, a perceptive three-year-old pointed out that if I was talking about anchors I needed a boat. “Yes”, I said “in fact my life is like a little boat,  I bob up and down with the highs and lows of everyday life but I do have an anchor which holds me steady”. (I also asked her if she’d like to preach next time).

The children’s choir sang “if you’re hoping and you know it clap your hands/stamp your feet/say Amen.” And the platform just about survived all the stamping and clapping!
Finally we came to our prayers: using the four letters of the word HOPE, we split into groups taking a letter each and coming up with things to pray for. Amongst many worthy items and individuals, the four people asked to pray did also manage to pray for hamsters, orangutans and elephants! Then everyone in the congregation took a letter H and wrote on it their hopes as a form of prayer. As they came up and laid them on our display of hope, they received a Hope magazine in return. 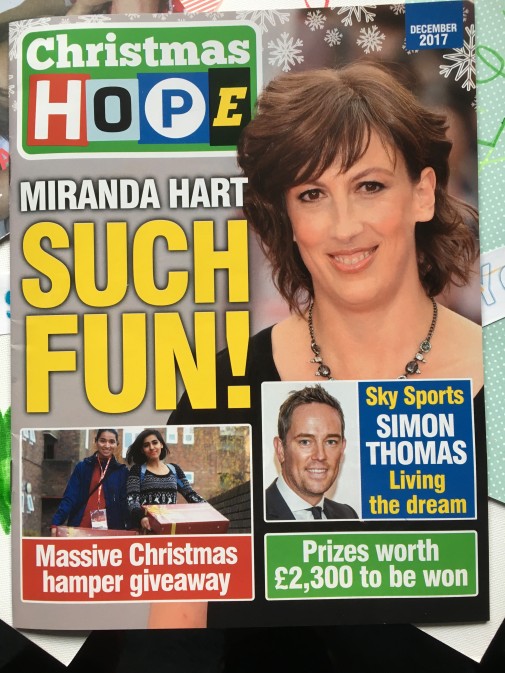 The children also made beautiful messages of hope, for a little four-year-old girl in the Philippines called Trinity. An organisation called Open Doors had made me aware of her story. She had been badly burned in a sectarian attack against Christians. Without going into too much detail with our own small children, we wrote messages of love and hope to send to her, see the picture below.

Before we finished we shared stories of Hope in our community and that we’d heard of around the world. One brilliant local example is a ‘Living Advent Calendar’ being put on in three streets near us: each night for 24 nights at about 6pm a different house lights up a window display  featuring  that night’s number and the neighbours gather to appreciate it and maybe share a snack and drink. What a fab idea for creating a sense of community!

We can ALL have hope, and we can ALL offer hope. ” May the God of Hope fill you with all joy and peace as you trust in him, so that you may overflow with hope by the power of the Holy Spirit” Romans 15: 13