Yesterday the General Synod voted on the admission of women to the episcopate. I began the day much earlier than I’d hoped after a restless night, so it was in the early hours before dawn that  I spent a lot of time wondering what the day would bring.

I knew there was a real possibility that the measure would not get passed and wondered how we would all be feeling at the end of the day.

For the last 4 or 5 years more women than men have been ordained to the priesthood. This does not mean we are a majority, not even close, I don’t mean to mislead you. But without women stepping up to lead, the church would be ‘somewhat stretched’. Sadly almost two thirds of those ordained women serve the church in an unpaid capacity. I say ‘sadly’ not in anyway to (further) undermine or criticise the ministry of my sisters who serve  God and their congregations so selflessly. But I can’t help be sad about what that statistic says about where the real power lies in the church of England.

To the rest of the world we look desperately out-dated. Even to ourselves we appear inconsistent because it had already been agreed that women do have the right to become Bishops, what was at issue was the protection of those who disagree.

So we have bent over backwards to love and accommodate a different ‘other’. Surely this has always been the Christian way? And that is the only shred of comfort I take from this situation.

We may well be misunderstood and it does appear ridiculous that 72%  of Synod can support the measure but it still doesn’t get passed and this is a matter to be addressed in due course. (Pray for the new Archbishop).

But yesterday morning it was the words emblazoned in gold on the ruined cathedral that stands next to my diocesan cathedral in Coventry that gave me strength. 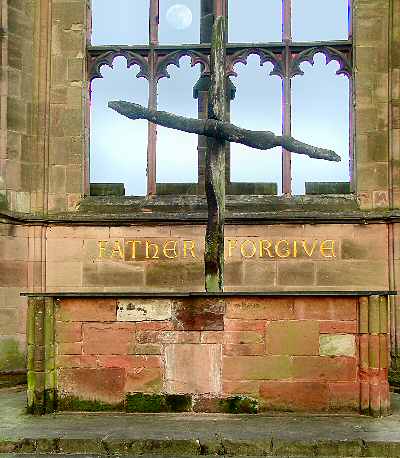 Whenever we feel powerless, misunderstood, backed into a corner, undermined, abandoned or unappreciated we need to remember that Jesus felt all of those things. He didn’t even have the comfort of a few close friends who understood what he was doing and why he was doing it.

He didn’t get the chance to explain to his followers why he appeared to be letting them down (‘No, really this is for your own good!’) But he still found the courage to give his life anyway and to even to forgive those who hammered in the nails. And that is the power that remains to us when all other powers are taken away: we still have the choice to forgive.

We still have the choice to work lovingly even for those who appear to reject us.

Lord, give us the grace to follow in your footsteps and forgive,

bring healing to your church and may we be willing to be instruments of that healing. Amen?

P. S. There was, of course, the resurrection…

3 thoughts on “General Synod’s decision… and my decision”