I have recently learnt to swim… again. 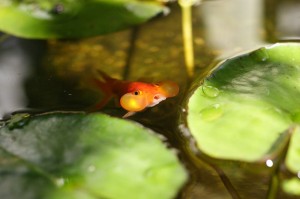 I guess I must have learnt when I was very small because I have loads of memories of swimming but none whatsoever of  actually being taught to swim, which probably explains why I was never very good. Terror of being underwater isn’t exactly an asset for successful swimming and had, I suspect,  a lot to do with older brother’s gleeful games of ‘let’s sink little sister and she how she squeals’.

Two years ago I taught myself front crawl, overcoming a life time’s fear of having my face in the water.

One month ago I realised my front crawl technique could possibly be improved so I booked a lesson with a swimming coach.

It was a humbling experience.

For starters, she never even asked to see my wonderful front crawl technique – of which I had been ludicrously proud.

Instead she put me through a series of unfamiliar and frankly weird drills, starting with the ‘dying goldfish’. She didn’t call it that, mind you. I don’t recall what she called it but it was an exact imitation of a dying goldfish: swim on your side, arms held firmly against your body, beady eye on the ceiling and move forward by only kicking your feet. As I said,  ‘dying goldfish’.

And I thought ‘I can’t do that… I’ll drown! And if I don’t drown, I’ll look silly, which might be worse!’

In fact drowning was not the problem, steering was. I did the ‘dying goldfish’ zig zagging from one end of the lane to the other.

Then, having mastered that drill, we moved onto ‘Superman Dying Goldfish’. This was the same as before but with your lower arm fully extended out into water as if flying like superman. I felt only slightly less silly and I wondered when we would get to front crawl.

Next came the ‘rolling log’ exercise, then ‘the zip’ and finally ‘swimming with all arms and no legs’ followed by ‘all legs and no arms’ (thankfully no actual limbs were removed for this part of the drill).

But hey, what do you know? One hour later, (just one hour!) I was swimming along, face in the water, three strokes for every breath and breathing on alternate sides…. Woweee! It was an awesome feeling.

What did I learn from this experience? Maybe that it’s never too late to say ‘I need to improve my ability to ….‘ To what? Parent? Relate to other people? Ride a bike? Make cupcakes? Read the Bible?  Just because you’ve done something for years doesn’t mean to say you are necessarily any good at it, there is almost always room for improvement.

If you want to improve at anything, the first thing you need is the humility to recognise you’re not necessarily brilliant already. Secondly a willingness to go back to the basics will help undo habits of a lifetime that have become ingrained and thirdly, get a good teacher and be willing to look silly.

(Lest I  sound smug, I need to reassure you that although I’ve made progress, I’m a long way off ‘olympic swimming ability’. I’m still in the beginners lane and there are 6 other lanes of gradually improving ability between me and the far side of the pool).

2 thoughts on “Still learning to Swim”