Brilliant, absolutely brilliant AND unrelenting horrible!  I read this book in 3 days on holiday (because I had to, I don’t recommend it as holiday reading) and afterwards I had to take out a very light-weight book about soft furnishings from the hotel library which I read with great relish and which significantly ‘soothed my soul’ after the horrors of Kevin.

It’s been out for some time, it won the Orange prize for fiction The film, starring Tilda Swinton, came out this year. It is a mother’s reflections on the birth, life and consequences of Kevin, her son, who at the age of 15 committed a horrific high school massacre.  The biggest question thrown up by the book is ‘who is to blame? The parents or child? Is it possible for a child to be so innately evil right from the start.

There is so much to say about this book, I almost don’t know where to start. It must be a good book because it made me really mad, it made me think hard and it disturbed my inner sense of maternal security. That’s a lot for one book to do. However I will be banning my adult daughter from reading it as I think it could severely reduce my chances of (one day) becoming a grandparent!

In her ‘Afterword’ Shriver claims (yes, she is a she and no, she doesn’t have children) to have left unresolved the question ‘has Kevin been mangled by his mother’s coldness or is he innately horrid’?  That he is utterly horrid seems beyond dispute but how did he get that way? Personally I don’t believe that the author was as even-handed as she claims: I think she does come down very clearly on the side of blaming the mother. The evidence for this is that she closes the story with a touching little scene of ‘reconciliation’ which is designed to make us feel sorry for Kevin (finally accepting the meaninglessness of his violence and terrified of his impending move to adult prison). Pushing us to feel sorry for him, Shriver in my opinion, makes him the character least to blame.

Here are the reasons she made me mad:

I think it is a ‘given’ that all of us leave our huge muddy foot-prints all over the lives of our children (just as our parents left footprints in our lives) but doesn’t this just make us who we are? Does it make us culpable for every unappealing characteristic or personality flaw our children develop?

Shriver pushes us constantly to decide who is the most to blame for the tragedy of Kevin’s heinous actions. But she only gives us two options: either the parent or the child. The third option is that we are all to blame. This is the belief that there is no such thing as ‘ evil people’ or ‘good people’, there are just people. All of us are capable of the myriad failures to love, of which Kevin’s mother is guilty. History shows that all of us, ordinary human beings are also equally capable of extreme violence and malevolent behaviour towards our fellow human beings. Solzhenitsyn said ‘the line between good and evil passes not through states, nor between classes, nor between political parties either, but right through every human heart and through all human hearts.

In other words ‘the heart of the human problem, is the problem of the human heart’ and perhaps that is the key reason why this book is so unsettling: it forces us to face our own capacity for evil. Kevin and his mum were ultimately not that different from one another: they both felt inconsequential. Eva has a child because she wanted ‘something to happen’, she wanted to leave a legacy, she wanted to turn a page. In other words she wanted something to turn up the volume on her own significance. Kevin equally felt the weight of his inconsequentiality, everything he did was to prove he was there and he could influence (malevolently) everyone he encountered.  They have the same problem, they take different routes to solve it but no body wins and a lot of people lose (their lives, principally). 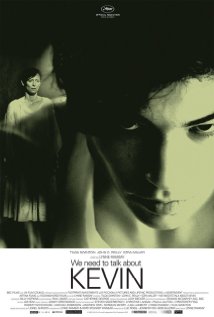 This is a book which is trying to get somebody off the hook – either the parent or the child. In my worldview, no-one gets let off the hook. We are all deeply flawed. Hence the simple elegance of the Lords’ Prayer ‘Forgive us our sins, as we forgive those who sin against us’. None of us can say, ‘I am not to blame, I’m not culpable, someone else failed to love me/treated me badly and that is why I am the way I am’.  That statement does not deny that some people have endured appallingly unloving behaviour/abuse from their parents but it does underline that who they choose to be in response to that is ultimately their choice and their responsibility. We cannot control what happens to us in life, the only thing within our control is how we choose to respond to what happens to us.

The essence of God’s commands to us are to ‘love’: to love one another and to love God. Every wrong thing that has ever happened in the world comes back to our failure to be able to keep these commands. So if evil is a reality, and if it’s a reality present in us, not just out there, then there had to be a solution. That’s why there is a cross at the heart of the Christian faith. To use Kevin’s words, someone had to ‘suck it up’ and overcome it. A battered, bleeding and vulnerable God hanging on a cross is a strong image indeed of someone ‘sucking up’ all the violence, evil, hatred and betrayal the world has to offer. The good news is that evil didn’t get the last word. The resurrection says that death and evil can be beaten, we can each be forgiven and, finding ourselves as children of God we find ourselves loved, significant and much more able to love unconditionally.

Flawed? Yes we are.

Damned without hope? No we are not, at least we needn’t be.

One thought on “We Need to Talk about Kevin – Book Review”