Three images are forming in me a sense of who I am and how I am called to live.

From a recent retreat I was privileged to attend in Glastonbury run by Ian and Gail Adams (www.belovedlife.org) I have come away with three powerful images of who I am. They may sound like yoga poses but they are metaphors that God had already been speaking to me about but which crystallised for me while I was away.

The title of the retreat was ‘Unfurling’ and in our first session we reflected what that word might mean for each of us. Gail offered several analogies and the one that immediately spoke to me was that of a seed below ground. I scribbled down both Gail’s words (across the top of the picture) and the image that popped into my head  and then  phrases about what this image meant to me. 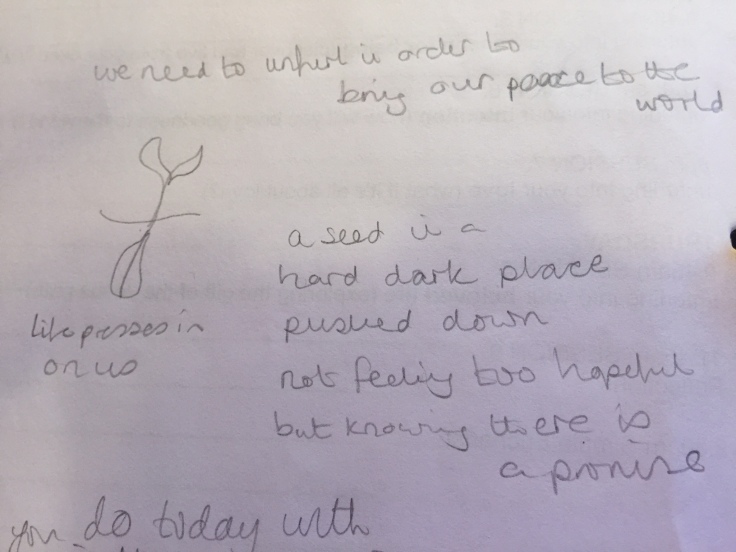 Later that day I was still thinking about how that analogy was both uncannily accurate but depressing and hopeful at the same time. I do feel I’ve been ‘buried’ in a difficult place, often pressed down by the difficulties of the environment and often somewhat discouraged by the lack of growth.

Suddenly I had a light-bulb moment: ‘I’ve seen that picture before! No, hang on a minute, I took that picture’. Scrabbling back through my recent holiday photos I found this picture.

It was taken on a mountain path in Spain where we had found literally hundreds of these flowers popping out of the ground: no leaves, no stalk, just “go-for-it” flowers shoving their way through the dirt and being themselves with joyful exuberance.

So beautiful, so fragile, so unexpected and so ‘in the way’!

I loved it that they stubbornly grew on the road itself, risking all that that meant in terms of being trampled over or ignored (but perhaps less ignored than they would have been growing off the path). They took the risk of shining in a place where they could be seen.

(Ouch – that last sentence was about to become prophetic – to find out you’ll need to read the ‘Cat’ post, coming next)

At the time I put the photo as a screen saver on my phone and savoured the idea of being a flower. Then on one of the next days Ian read us the poem below. Put the two together and you have all the reasons why I now see myself as a flower.

I thought I was dead;

in the dark damp earth

but in the deep

you were forming me

ps I shared this with a friend with a farming background, he told me to look up ‘vernalization’. I did. Here’s what I found – for anyone else who feels like a buried seed, it’s most encouraging.

Vernalization (from Latin vernus, “of the spring“) is the acquisition of a plant‘s ability to flower in the spring by exposure to the prolonged cold of winter. After vernalization, plants have acquired the ability to flower, but they may require additional seasonal cues or weeks of growth before they will actually flower. Vernalization can also refer to herbal (non-woody) plants requiring a cold dormancy to produce new shoots and leaves.[1]