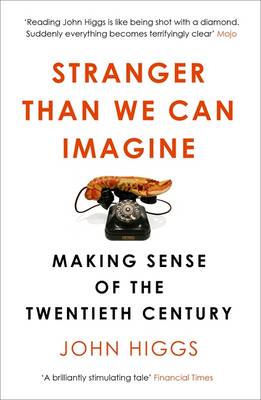 This is an amazing read!

It leaps from relativity to Cubism to Surrealism, to the optimism in Star Trek and the nihilism in Casablanca. It explains quantum mechanics using a hilarious analogy of Putin punching a kangaroo. From there it goes on to existentialism, individualism and the space race.

Higgs has written a factual book that manages to be a page turner. Don’t simply dip into the chapters you fancy because you’ll miss the thread. He builds up a case which connects all the huge changes of the 20th century to one theme. It’s an intellectual ‘dot to dot’ tour de force. If I’d read this book before I did either of my degrees, it would have helped SO much.

It’s a hugely entertaining read. He draws on seemingly obscure information and you wonder how it could possibly be relevant but watch out because he will circle back to it later.

For anyone my age or above, he is writing about stuff we can actually remember. For anyone younger than me this book is a most accessible and readable account of the 20th century. If the first rule of understanding where you are now is looking back to see how you got here, Higgs traces humanity’s journey through the last 100 years along the paths of science, music, culture, war, and, to some extent, religion.

Which brings me to one of the two ways in which I would dare to criticise this book. Firstly, he gives a great deal of prominence to people who were really very obscure whilst overlooking others who have been massively influential. One of these obscure people is Aleister Crawley whose ‘thelamite’ religion gets a higher profile than I feel it merits – even though he was on the front cover of the Sgt Pepper album and he was included in a list of 100 most influential British people from the 20th century compiled in 2002. I can see why Higgs gives him this profile. Crawley’s religion epitomised all the most negative traits of individualism – his guiding motto was ‘do what thou wilt’ (without the caveat of ‘so long as it doesn’t hurt anybody’). So Higgs is using Crawley as an illustration rather than trying to make a case for his prominence. All the same it’s annoying that he is referred to so frequently whilst far more outstanding examples of humanity are over-looked.

Individualism is one of the very strong themes that run through the book. The other central idea is that the 20th century was the century in which the world either rejected or found inadequate any framework or concept which claimed to give us a fixed place to stand, a way to understand the world or human beings or God or science – he calls this concept an ‘omphalos’ and it might be a belief or an idea, a deity or a scientific theory. But one by one, he charts how the ‘omplaloi’ (plural) fall through the 20th century.

So my second criticism would be that he completely overlooks the huge extraordinary, world changing rise of the Christian faith particularly through such movements as Pentecostalism. None of the positive movements that have streamed out from groups and individuals motivated by faith were noted. As early as the First World War it was the Young Men’s Christian Association (YMCA) who provided compassion ministries on the field of war and rehabilitated 32,000 ex-soldiers into jobs of work after the war.
Ministries such as that of Oxfam arose from the catholic end of the Christian spectrum. No single stream of Christianity holds the corner on compassion.

I feel that this oversight leaves this book completely lacking in hope. Read it and you will find out all sorts of fascinating things you may not have known. I didn’t know that the most eminent researcher behind the American space programme was a bone fide Nazi who had worked in concentration camps. I didn’t know why the Beatles called themselves the Beatles, (in truth I’d never thought about it but suffice to say it’s nothing to do with insects). I didn’t know that the only ‘positive’ element to existentialism would be its emphasis on ‘living in the moment’ (Hmm – that has interesting implications for mindfulness). From the reasons for Kurt Cobain’s suicide to chaos theory and the connection between the growth of corporations and the 14th amendment of the United States Constitution, Higgs makes so much so very, very clear – yes, even quantum mechanics and Schrödinger’s blessed cat which is alive and dead the same time.

But what Higgs doesn’t manage to do is give any sense of hope. He tries. He tries very, very hard in the final chapter which is given over to a consideration of the influence of the Internet: how it has made us all so much more connected, how it has given rise to a greater accountability and transparency. In these he finds reasons for hope: he thinks that the Internet has imposed what he calls a feedback loop on our culture “we are being made to take responsibility for our choices”. Forgive me for sounding cynical, but I really don’t think the Internet has that kind of power. The Internet itself is morally neutral, like money. It can be used for good but it can be used for bad.

It came as a surprise to me that as a culture we are now beyond post-modernism. I’ve probably just been a bit slow to catch up but apparently “the entire edifice of post-modernism” has now been “routinely rejected”, if not by popular culture (of which I am clearly a part) then at least by academia. “Our current ideology” Higgs says, “stresses that of course there is an absolute“. His italics, not mine!

But don’t hold your breath, waiting for him to tell you what that absolute is. “The absolutist approach to the contradictory nature of scientific models is to say that while all those models are indeed flawed, they will be superseded by a grand theory of everything, a wonderful theory that does not contain any paradoxes and which makes sense of everything on every scale.” That such a theory might finally emerge, Higgs admits, is a leap of faith.

But for such a very erudite person, Higgs is peculiarly ill-equipped to make any ‘leap of faith’ and this is why the book leaves a lingering taste of disappointment, hopelessness and even despair. If you are someone with anxieties about the future I would not recommend reading this book.

He demonstrates a complete misunderstanding of the concept of Christian love, discussing it, as he does,  in the chapter on sex therefore equating love with sexuality in a way that totally overlooks the powerful, life transforming, self giving unconditional kind of love expressed by the God Christians believe in. Muddling  ‘Eros’ with ‘Agape’  puts him in academic kindergarten as far as understanding faith is concerned.

Which is a real shame because Christianity is very good at holding onto paradoxes -believing that two opposing things are true at the same time. These are at the heart of our faith: Jesus is “fully human and fully divine” to name but one. I loved his section on quantum mechanics: how subatomic particles can be in more than one place at one time, how they can spin in different directions at the same time, how they can move instantaneously from one place to another without passing through the distance in between and how they can communicate instantaneously over great distances.  But no one who has ever read their Bible should have any problem with any of those things!

Perhaps he should ponder Colossians chapter 1:
“for it was in Him (Christ) that all things were created, in heaven and on earth, things seen and things unseen, whether thrones, dominions, rulers, or authorities; all things were created [planets, stars, neutrons and protons] and exist through him and in and for him. And he himself existed before all things, and in him all things hold together” (v 16 and 17).

If this isn’t a description of an ‘omphalos’, I don’t know what is.  Yes, it takes a leap of faith to accept it but if the alternative is meaninglessness and despair…..?

That Christ is the connection between heaven and earth, that the coming of the kingdom of God ‘on earth as it is in heaven’ is the only reason for hope and that God can be addressed as a loving parent (‘Our Father’ or mother) not simply another version of a feudal ‘Lord’ (which Higgs takes as the reason for the ‘decline’ of Christianity, which, by the way, hasn’t actually declined at all if you take a global view rather than his short-sighted western view) – all these are substantial and in my view trustworthy reasons for hope.

So read this book – but don’t despair! There IS hope, of which I shall shortly say more…