In Luke chapter 9 Jesus stops the disciples abruptly in the middle of their own private ‘glee fest’, Eugene Peterson the author of the message puts it this way: “while they were exclaiming over all the things he was doing, Jesus said, “treasure and ponder each of these next words. The Son of Man is about to be betrayed into human hands“.

He is very emphatic that they are to think very carefully, store up, memorise, “treasure and ponder” each of these words in the horrifying statement that he made. Why would he do that? And what does this statement mean?

Being “betrayed into human hands” would mean unfathomable ‘failure’, betrayal, loss, death, shame, defeat, darkness and cruelty. Yet these negative experiences are also somehow woven or taken up into God’s glorious plan of salvation.

So why should we “treasure and ponder” the darkness which is the crucifixion story? We should do so because of who it was who went through it and what that means he understands about our lives.  If the Son of God has been through all of those experiences, if those things were permitted to be part of Jesus’s life might it not be realistic and normal to assume that they might legitimately be part of mine? Why do I rail at God when things go wrong, instead of remembering that he is with me in this valley just as much as on the mountain-top.

We get awfully screwed up about ‘why God permits bad stuff to happen’ as if God is some sort of cruel despot, mixing into the cauldron of our lives: ‘leg of newt, and eye of toad’ aka suffering, pain or defeat. God is not deliberately dishing out misery just to ‘teach us something’.  Of course we can LEARN something, we can always learn something from any experience but that isn’t why it happens. It just happens!  I’ve never been happy with those who advocate a kind of resigned acceptance along the lines of ‘it’s all part of God’s plan!’ Rubbish! It isn’t. God never planned for cruelty, pain, rejection, tragedy and suffering. These things are just there. They happen. They are part of the experience of every human being and have been since it all went pear-shaped in the garden of Eden (or should that be ‘apple-shaped’?). 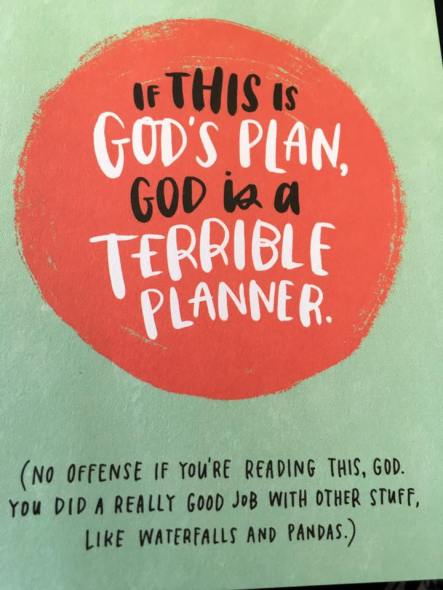 That rubbish stuff happens to us is not directly our fault (yes of course if we drink and drive, experiment with illegal substances or simply fail to take care of ourselves, then there is a causal link) but the vast majority of rubbish stuff that happens to us, just happens.

These are the times when we must ‘treasure and ponder’ that we have a Saviour, Brother and Friend who has been into the deepest and darkest of human experiences and promises that whatever we face he will walk through it alongside us – he’s been there already.